A downloadable game for Windows, macOS, and Linux

Because We’re Here is a bittersweet otome dating sim in an unforgiving WW1-inspired setting.
It's a narrative-driven episodic visual novel. This is the second of four acts.

Can you find love amongst doomed youth?

A month has passed since the events of Act I. The First Lassallian War shows no signs of resolution, and rumours of a spring offensive hang heavy over both sides of No Man’s Land.

At long last, Private Rauss of the Wesslinger Postal Corps enters the war in earnest. Though yet to make her peace with the tragedy that has devastated her circle of friends, Elfriede is determined to keep following her heart - even through the hell where youth and laughter go.

It is highly recommended that you play Act I of Because We're Here before beginning Act II:

All Because We're Here purchases on Itch include a Steam key.
(NB: on Steam, Act II is DLC - so you must have Act I in your Steam library.)

In order to download this game you must purchase it at or above the minimum price of $5.99 USD. Your purchase comes with a Steam key. You will get access to the following files:

I had a lot to say about this game in my head while I was playing.

After finish it for good, I'm just...I don't have anything to say. Everything happened in this act.  I could feel my eyes getting weary here and there and I was gritting my teeth far too many times. .

I don't know how to use spoiler option here but bear with me.

Spoilers ahead. I'm sorry but I need to get it out.

I REALLY WANT TO GIVE A VERY GOOD  SHAKE TO ELFRIEDE AND ASK HER WHAT THE HELL ARE YOU DOING GIRL? Sure I understand people panic. They were in wars and it's not unreasonable to freak out here and there, yet I have no idea how everyone can put up with everything and not snap at her too, considering everyone is in the same situation. Don't get me wrong, Elfriede is a very delightful mc and many banters from her are genuinely appreciated. But I guess I'm not very compatible with her in some scenes.

AND YES OUT OF MANY CASTS HERE I WENT FOR MARCIUS FIRST THEN OUR BOY CORPORAL. I'm in tears right now and I don't think my Elfriede will deepen a relationship with anyone anymore. She's so done. Like yeah everything could happen anytime in this game, truly. At this rate, who is going to be with us until the end of the last act?

The story is amazing, truly, but if you cannot cope well with major character deaths (empathizing on 's') like me you will find this very stressful to read. One time is okay. The second time hit me hard. The third time was numb. The fourth was...I'm done. The last character I care as an LI. Gone.

I kept the warning in mind before I got the game but it seemed I'm not fit for reading this. I'll keep this game in my heart, how beautiful the castings were, but I don't believe I can stomach anymore loss of the characters.

It was too well-written making us morn for characters like this.

I love this game so much. I cried a lot. normally i would get back to my happy self after finished but this one really got me sad for week. it stuck in my heart ...

cant wait till act III --I can do it!

Act II is everything I hoped and feared it would be.

It´s painful in all the best and worst ways. There were a couple of parts where I felt like I needed to stop reading for a while and process everything, but couldn´t because the game immediately threw me into the next life-threatening situation and I just had to find out what happened next.

I was never prepared. For anything. Not even for the introduction of the final main character. This series doesn´t just have an unusual setting for an otome game, its whole way of unfolding its story is unconventional.

Now that the cast is "complete" I certainly do have my favourites, but there isn´t a single character I don´t care about, which made for an especially intense read.

The recurring characters from Act I change with more exposure to the war, including Elfriede herself. Most of them not for the better. Which was to be expected, but it also made me wonder: Where will these people end up physically and emotionally once the war is over? If they even survive? Am I just setting myself and Elfriede  up for (even more) heartbreak if I pick this route?

At this point I can´t imagine a happy ending for the cast. Too much has happened already, and too much will keep happening. But I need to see it through to the end.
Reply
Grotty1 year ago(+3)

[Copy of my Steam review]

After I beat Act II, I had to sit back for a bit and reflect on the events that had transpired. My hands were shaking and had been for the last hour and a half of reading. I never felt so distraught reading anything in my entire life, to the point where it left me feeling emotionally drained for an entire day afterwards.

And yet, I have a hard time calling the whole experience anything but beautiful.

If you came here to check out the reviews for Act II, chances are that you already played the first and want to know how this one compares. Or you want to know if this one addresses some of the complaints raised in Act I reviews before jumping in at all. So here you are:

Length:
I saw some complaints about Act I being too short for the price tag. My first playthrough of Act II took me probably 20 hours in total, but I am a very slow reader and a non-native speaker who looks up words I don't know. A faster reader should probably still get a good eight to ten hours out of it, which I think is more than fair even just talking about quantity here and leaving the (very high) quality of the writing out of the equation.

Plot & Writing:
Now that Elfriede is in the thick of the war herself, don't expect any moments of upbeat jubilation like the first half of Act I. If you thought the second half was too grim, this part does have it's moments of levity, it's not really going to get better. So be prepared for that and stay clear if you don't think you can deal with it right now. The game does have it's share of humorous quips from our colorful cast, which does lighten the mood somewhat.
I'm being deliberately obtuse, because spoilers for experiences like this are the worst.
If you think you can handle it, personally I consider this VN to be must read, because this is the part where the game truly shines. The writing is still skillfully evocative and makes you care about its characters, even the ones you want to punch for their shortsighted selfishness. And I'll always be impressed how well this game handles character voice (making different characters sound like different people in the way they are written), something most visual novels I read either struggled with or didn't even try.

tldr: If you enjoyed the prose of the first part, you won't be disappointed by a sudden dip in quality or lack of humor. Game's still really dark, though.

CGs:
The CG artist is still the same as Act I, but their skills are improving. I actually really liked the portrait shots of Elfriede's comrades, they actually resemble their sprite remarkably well for being in a different art style, unlike in the last scene of the previous chapter. The others can still be hit or miss.

I'll leave it here, this is too long as it is. If you can deal with dark stories about war, this is a must read. If you can't, maybe come back when you need a good reason to cry.

I'm not even finished one play-through of this act yet. I just had to say that there is a single moment in this that is more than worth the price of admission. I audibly gasped, hand over my mouth. I can't remember the last time a game made me feel like this.

I think back to the scenes before it and how well it was all planned to make the player's stomach drop. Horrifying and brilliant.

(putting this here bc for whatever reason i find itchio more approachable than a steam review)
genuinely i have been following the dev of bwh for........ Ever. i remember the first demo. it made me cry. idk why after that i thought "yeah i can handle three more acts of this" and yet here i still am!!!!

it's hard to walk away from the story, i find. the writing, especially, is fantastic, and i'm being impacted by characters i dont overly CARE for which is nuts to me? i walk away from getting all the endings (including the alt one) absolutely reeling and overanalyzing everything from actual in game lines to the steam achievement titles. im obsessive. not for everyone admittedly, considering i legit feel like i need a break from even thinking abt bwh, but like. is Good.

i look forward to? fear for? the next arc. good luck !

(Copying over from Steam)

I returned to this game, after playing Act I in June, when Act II came out- and it delivers on everything Act I promised with a vengeance and then some.

Act II is just as well researched and realized as the first act, and the story successfully sprawls across all the shell-shocked ground it  covers. Allies and foes alike are pulled into the light as you venture through the trenches as Elfriede, and through her words you feel the sheer gravity and fatigue of everyone who is caught up in the war.

The addition of so many new characters and perspectives enhances, for the viewer, what is at stake and what the war means to people from all walks of life. Though senseless acts occur, the actions make sense given the circumstances.

This drama works in contrast with its more light-hearted art style and somehow makes things all the more tragic when everything goes wrong.

BWH thus far is an arresting game that will take your heart, drop it on the floor, and leave it to beat helplessly through rain or shine-- and while it does pour, the sun peeks through!

I have no words for this act. At least nothing that seems coherent. Finished my first play through about ten minutes ago. Just kind of leaned back and went "well, f---." Very few games have ever taken me on such a roller coaster of emotions.  I can't really go into details without peppering this with spoilers, but dear lord my heart's in a million pieces.

To anyone reading this, do yourself a favor and get this game. You'll laugh, you'll cry, you might yell at the screen (i did, repeatedly), and you'll probably feel like a terrible human being at least once. It really put me through the whole gambit of human emotion and any story that can do that is one worth experiencing.

This game has left me broken and weeping on the ground. My heart has never been shattered so much in one game sitting. I now ask for the sweet release of death.

Well, that's a recommendation if I ever saw one. 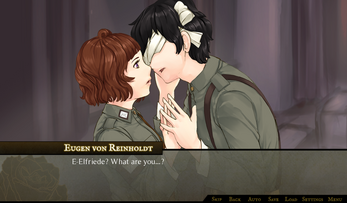 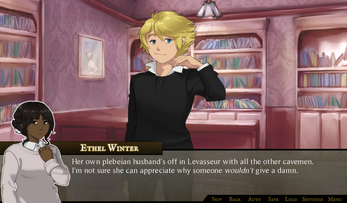 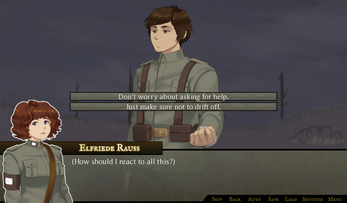 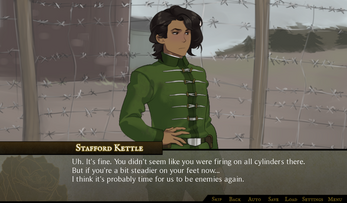 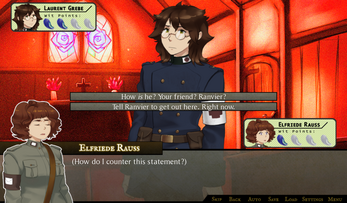 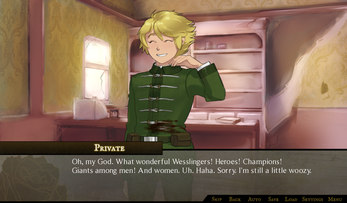 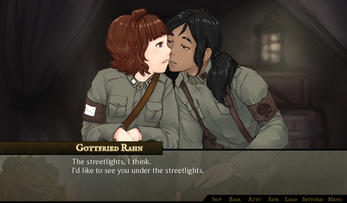